The insatiable energy, curiosity and sheer exuberance in her making, shines through in this short Q&A with ceramic artist Robyn Lees. Equally, Robyn’s rambunctious ‘women’ reflect her gutsy approach to life – a delight to behold.

Robyn is based in Denmark in the south-west of Western Australia,  where there’s an energetic visual arts and craft community.

What is your craft? How do you like to describe yourself?

I’m a clay maker, I don’t call myself a potter because I don’t do production work. I find it difficult to do repetition, I get bored quickly; I enjoy doing one-of pieces. However, I respect the art of pottery and its traditions. I try to honour that tradition by including in my sculptures a degree of functionality through my lady teapots and jugs. As far as art goes, I love to dabble in everything, I don’t like to restrict myself to one material.

Your studio – where and what is your studio/workspace like?

My studio is a huge shed and it’s a total and utter mess. Everything is stacked up the walls. I have to weave my way in between my tables.

Which of your tools do you love the most and why?

I love the wheel. Even though I’m a sculptor, I use the wheel for making my sculptures most of the time. When I first learnt how to use the wheel it was like meditating. You find yourself in this wonderful circular, calming space. If things aren’t going to plan on the wheel, I don’t worry about it. I don’t ditch the work, I use it as a chance to bounce off and go somewhere else.

Your inspiration – what really pumps your creative heart?

I’m inspired by everything. I went for a walk yesterday in a new place along the Wilson Inlet in Denmark on the Bibbulman Track. I took a whole lot of photos which are now going to feed work for a project with a mixed group of artists called ‘Refugium’. There was so much inspiring material on my walk, I was salivating!

What was the spark that made you choose this particular medium?

I initially trained as an art teacher specialising in painting. I didn’t really get into clay until later on. I’ve always drawn, even as a little kid. However, when I had my own kids I found you don’t have the space to draw, it’s too hard with a million kids around, and you can’t paint either.

Having said that, I did find that I could make small clay pieces. I started making ocarinas (a type of vessel flute) and selling them at markets in Melbourne. So, I had to learn how to play them. I could play one song to start with, ‘Scarborough Fair’, and by the end of the market stallholders were virtually ready to throw tomatoes at me to get me to stop playing! I did learn other tunes though and wrote a booklet on how to play the ocarina. Then, after a while, I thought, ‘this is all very well but I don’t want to make the same thing over and over again.’

I decided to go back to study, majoring in ceramics. I went to Joan Campbell’s studio to enquire about studying and met Warrick Palmateer there. He advised me, ‘If you want to learn skills, go to Perth Tech, but if you want to learn the philosophy and stories go to university.’

My kids were very young then, and I found out that part-time study at Perth Tech was 13 hours a week. It was too much for me, so I went to Edith Cowan University (ECU), which was setting up a ceramic course that I could attend for much less time and could fit in around the kids.

I had taught myself to use the wheel by the time I went to ECU and loved it. I told them that I wanted to do wheel-work and sculpture. They allowed me to go wherever I wanted with my work.

Soon, I discovered that I needed a story to underpin the conceptual side of  my work. I started making double skinned bowls and to justify them I developed them into ‘womb pots’. Then more and more I started getting into the feminine side of ceramics. The ceramic terminology is very human with feet and bellies. I started making big sculptural pieces that were all thrown and then assembled. 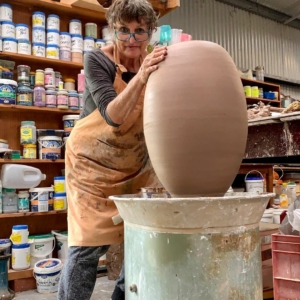 If you look at the figure, it’s a set of cylinders. I started throwing large cylinders, cutting and altering them and sticking them together. I love that pottery is a functional craft so I made teapots. Even the big ladies I sculpted were functional teapots. They had open mouths from which liquid would flow. I started putting really ugly children on the hips of the sculpted ladies. The children had their mouths open, screaming, looking like gargoyles.

I wondered what I was doing and realised that unconsciously I was making myself as the gargoyle and it was my mother holding me. My mother came from the generation of women who had been through the war – they’d had a hint of independence and it was taken away from them. Some were furious and embittered at being trapped in the kitchen. I then looked at my work and realised all of it was about my mother, bending over, holding up the family – the women as martyrs. People say my work looks so happy, but the women I sculpt are all functional utensils. My women are beautiful and very functional.

Your working style – how do you like to start on a project and then progress it? Do you stick to a working schedule 9-5 or flex around a bit? Do you play loud music? Are your pets welcome in your space?

I have a million projects on the go everywhere. Some get discarded for a while and then I come back to them. I think that’s not a bad idea, I’ll finish that now..

What are you working towards right now?

I’m working towards ‘Refugium’, an exhibition by the ‘Mix Artists‘ group in Albany. At the same time, I’m working on an exhibition at The Butter Factory Studios in Denmark, opening in September (2020) called ‘Earth Cry’.

I like to have a lot of time to prepare for shows. I always have loads of ideas. I wake up in the middle of the night and think I’m a bloody genius, but then you start working on them and realise you’re an idiot and they’re not going to work, but you use those ideas as a jumping off point.

Clay is like a second language for me. I often do things unconsciously – I go into a little trance and they just happen; it can be a lovely surprise. Sometimes I start things and I fight and struggle with the clay. Most of the time I can get a decent piece from it but I can tell when I have struggled. The work sometimes just doesn’t appear out of the fight, I decide to cut my losses and walk away. However, sometimes, because I’m a stubborn individual, I don’t walk away and I keep going.

Painting is so different. I start, get partway through, I think this is utter crap, what am I doing? Yet, I know that if I persevere I will turn it into something – it will change. Because I’m aware of this creative pattern, it gives me the confidence to continue. Whereas clay carries the story of your every move and struggle.

If you could land the dream commission/exhibition/project, what would it be?

I took commissions early on in my career and I hate them. I’ve learnt not to go there because people have an idea in their head, you talk to them and think you both have the same idea but when you produce the piece you can see in their eyes a tiny flicker of disappointment. It’s the worst feeling. I want them to fall in love with the work and if they don’t I’d rather trash it.

My dream exhibitions are group ones. I’ve done a lot of solo exhibitions and I do love working thematically, but they are so exhausting and the burden is all on your shoulders. It’s very exposing. On solo exhibition opening nights I usually get blind drunk due to the stress and tension. It doesn’t happen at group exhibitions because the responsibility is shared and it’s a more pleasant experience.

Collaboration has its difficulties in reaching a shared vision, requiring compromise which can be a dampener. So you’ve got to maintain your vision within the group. I’m strong enough to achieve that.

I’d like to add that I’ve had a marvellous existence working in the arts. I’ve got absolutely nothing to complain about. I do it for myself most of the time and it is my lifesaver. I think if I didn’t work (and I work nearly every day), I would be insane. Sometimes life is difficult and my work is an escape into my own world. I can’t be followed into this world, it’s my own.

[Collected August 2020. This is a standard set of questions that we ask of all our guest presenters and ‘makers of the week’. They are deliberately low-key.]

Read more about Robyn Lees in our Directory. 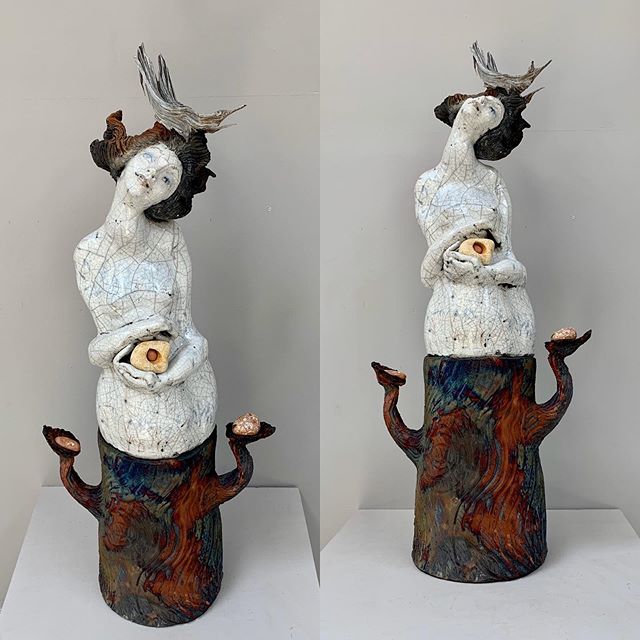