An international selection of short films that explore materials and making, celebrating craft in all its facets.

Be the first to view the 2019 selection of ‘Real to Reel’, the short film festival dedicated to craft and moving image

For the second year we will premiere the annual selection of short films about craft, produced by the Crafts Council and Crafts magazine (UK)

This year we host an exclusive double-bill premiere at The Backlot in West Perth of this year’s 33 films. We are stoked that three Australian films made the international cut, alongside submissions from Africa, the Americas, Asia, Europe and Scandinavia. 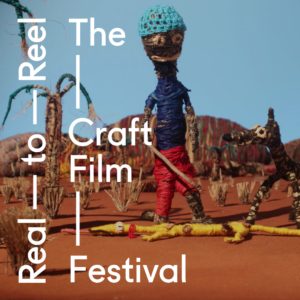 Real to Reel will premiere in Australia on Friday 2 August at The Backlot. Book now.

In the following weeks, the films will tour to Mosman Park (WA), Melbourne with Craft Victoria, Sydney with Australian Design Centre and Casula (NSW), as well as Denmark (WA) and with other venues to be announced.

The 33 short films are divided across two sessions, that cover an incredible diversity of styles, people and approaches.

This year, the Real to Reel selection panel was joined by knitter and filmmaker Lorna Hamilton-Brown MBE and Gary Thomas, film programme manager at the British Council and co-director of Animate Projects.

You don’t have to be a ‘maker’ to enjoy these films. As the stories are intrinsically about connections, the power of the hand, tactility and our most basic human instinct to shape materials.

Ranging from just 18 seconds to 11 minutes, there’s plenty to inspire.

Real to Reel 2019 is presented in Australia thanks to Maker&Smith.

Real to Reel at Camelot on Friday 9 August; Screening 1 and 2 – come to both or choose one.
Also conversations about the collaborative work of makers of craft and film will also take place. Line up will be released soon.

The elemental nature of creating in clay comes to the fore in this short film about ceramist Kat Evans. Her asymmetrical sculptures speak of the processes that made them: pinching, coiling and paddling. Hours of careful and deliberate burnishing create a perfectly smooth canvas for a dramatic smoke firing.

The Shipworm and the Glory of Enkhuizen

In conversation with the Zuiderzee Museum’s blacksmith and gardener, designer Alexis Gautier uncovered stories about cross-pollination between the Netherlands and the Dutch East Indies. He learned how a small exotic animal, the shipworm, became a disaster for the Zuiderzee’s dyke posts, and how a Dutch cabbage returned home after a long journey to the Far East.

Tjanpi Desert Weavers is a social enterprise of the Ngaanyatjarra Pitjantjatjara Yankunytjatjara (NPY) Women’s Council that enables women in the remote Central and Western desert regions of Australia to earn an income from fibre art. Ngaanyatjarra woman Maureen Butler tells the story of her hunting dogs Bluey and Big Boy, illustrated through stop-motion animation by Jonathan Daw.